As you may have seen from my last blog, we are inundated by radishes. I planted some called ’18 day radishes’, some French breakfast, some seeds from last year’s radishes and Jake also planted some. We’ve had half a kilo already, ranging from mini ones to ones as big as turnips. Not bad considering they went in on the 13th March – and were ready at least a week ago!!

In all honesty, I don’t like radishes much. I planted them out of sentimentality because my Gramps loved radishes. Steve likes radish, but even with his love of radish, you’ve got to have a real fetish to eat half a kilo of the things. So, I was looking for recipes with radishes. I found two that might have been a bit appetising.

One was in an old Readers’ Digest manual – brie and radish mousse. The other was in The Silver Spoon – my bible of cooking. We had camembert, not brie, but I didn’t think it would matter. You have to chop the rind off a very ripe brie (or spoon it out – much easier!) mix it with a little double cream, whip up the same amount of double cream, add some powdered gelatine and mix in the radishes then leave it to set. I confess I chose this one because we had a ripe camembert and I needed something to do with it.

Because the cheese doesn’t ever really mix with the cream – it just becomes a mix rather than integrated – and the gelatine has to bind the two – which it didn’t really – it just did that nasty thing of going all stringy and horrid – it just ended up a bit of a gloopy mess. I thought it was quite edible, but it seemed to bring up a lot of phlegm. Dairy will do that if you’ve got a cough! Steve did NOT think it was edible, professed it looked like phlegm, ate one mouthful and did a face like Jake does when faced with any one of his food dislikes: one of utter disgust.

Not one to be kept then!

The second recipe fared a little better. It was radishes in yoghurt. I chopped them (you’re supposed to have an apple in it, but I didn’t have one, and I had a lot of radish, so I just did radish!) mixed Greek yoghurt with lemon juice, celery salt and pepper – perfect. This works. Steve’s finishing it off as I write. I can probably get away with some celery and apple in there too.

Of course, the internet is my favourite recipe book and I’ve since found several that make me want to grow more radishes. The first is the lemon, chilli and radish salad which looks like I might even try it. It reminded me that quite a lot of oriental food uses radish – I saw a lot of dishes with radish and seafood in some kind of eastern sauce. It’s become clear that a ‘smoothie’ of vegetables is a real part of French cuisine in restaurants at the minute – gone are veloutés (despite G. Ramsay’s misuse of the term!) and confits – so my second choice is a french radish smoothie with carrot paté and artichoke and chorizo muffins. It combines much of those elements the French seem crazy about at the moment, cuisine-wise – American stuff like smoothies and muffins, with a real French twist. Plus, it’s cheap to make. I think this is one for the next radish harvest. The final one is a more old-fashioned, dare I say passé recipe from Sophie Grigson for citrus radish confit which also looks splendid. I’m actually looking forward to our next radish crop now.

We noticed yesterday that the cherries are beginning to ripen – some had turned orangey-green. Today, they’re definitely red, although not so many of them are that stage yet. You can almost watch them ripen before your eyes. We ate one each – they weren’t deep red on the inside, but they were still fairly edible. I think I’ll wait before I eat any more though. They were perfect last year when we came in the last week of May.

And now to this in six weeks! 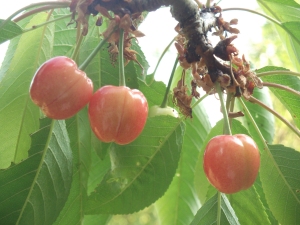 I am waiting for this: 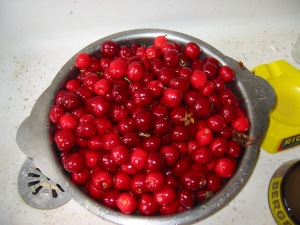 … is that they are always plotting… they always look like they’re up to no good. In fact, I think chickens are probably responsible for secret revolutions everywhere. George Orwell was very wrong with his decision that the leaders would be pigs, as in Animal Farm. I understand the allegory of leaders being pigs, though that’s unfair on pigs. It would be chickens. They’re evil with their dinosaur feet and their beady eyes and their plotting ways. Pigs are fat and happy. Chickens are restless revolutionaries. I’m sure this is why Cuba is such a revolutionary place, because there are millions of chickens roaming about there. Our chickens mostly spend their time plotting the downfall of the dogs – the military junta of our sovereignty – and chasing Moll off. However, they have busily been stealing my blackcurrants and redcurrants – then pretending they had nothing to do with it when I asked them.

My laryngitis has subsided somewhat to a pointless hacking cough – and my voice sounds more like my own voice rather than Barbara’s from The League of Gentlemen. If you haven’t seen her, she’s a post-op transsexual taxi driver in a strange village. The operation was not particularly successful and she has a deeper voice than most men.

Me & Stephen have been busy in the garden, as per… the polytunnel #2 collapsed  in his absence and he was most distressed. However we have begun our harvesting – only radishes, peas and lettuce, but enough to keep us going until the main crops start. The potatoes are already beginning to flower – the broad beans are fattening up. We have radishes the size of turnips and turnips the size of swedes. It’s been so dry though – not a single drop of proper rain, other than a light soaking a couple of mornings – since the third of April – that’s almost a month. Luckily, the existing polytunnel has a super-duper watering system courtesy of Mr Stephen and it’s lush in there, at probably tropical temperatures and humidity. Unfortunately, whoever is in there is often caught out by the watering system being switched on by Tilly. Tilly has had the blame several times for me getting a good soaking, although Stephen’s insistence that it is her is a little suspicious considering she doesn’t have opposable thumbs to turn taps or a single thought in her head other than where to bury bread rolls, eggs or bits of things she might want later.

We’re now full to brimming in the polytunnel and all the plots are bursting – not just with plants, but with les mauvaises herbes. Bad grass. Naughty grass gets everywhere and I’m so tired of convolvulus that I dreamt about it last night.

Steve is convinced that things have grown exponentially since he departed two weeks ago – he’s right. We have full lettuce heads and tomatoes beginning to put out flowers too. I’m absolutely amazed and delighted by it all!

1. The Boy’s improved mood after I threatened to withdraw his right to electricity if he answered me back just one more time.

2. Steve, stick-man, saying he needs to go on a diet because he’s reached 12 stone! He needed a bit of meat to keep him warm.

4. Verbena… I’d have hundreds of verbena if I could afford it:

5. Steve relishing the chorizo and pepper risotto last night; nothing like old favourites that weren’t old favourites a year ago! I love cooking here, even if I only have one work surface! We’re also infested by ants.

7. Sleeping with the window open

9. Brocante season. I love a good rummage, me! Brocantes, vide-greniers and bric-a-bracs are French car boot sales. And they love a bit of recycling.

10. Spending hours looking through photos my Nana has entrusted to me of her final 10 years with my Gramps. Happy pictures of the most lovely people in the world.

And 3 things I’m not loving:

1. Tilly getting up for a wee at 4:00 a.m. on my red patent leather shoes and me not realising what she was doing until it was done

2. Coughing for half an hour before getting back to sleep