In Bury, Steve lived on Chaffinch Drive, next to Goldfinch Drive on the salubrious ‘Dickie Bird’ estate. It is rough as anything on that estate and I can’t say I’m not glad we aren’t there any more. Not a day would go by without some drama and it seemed the police and various ambulances were on constant drive-by. I can’t count the nights we were woken up by pissheads arguing in the street. Jake had several bikes stolen, even though we kept them inside, and it was generally assumed that if it wasn’t nailed down, it was anybody’s. That said, Marie, his next-door neighbour, is a stellar individual, although I don’t miss her coughing in the night or baying “Monty!” at her dog.

Here, we have real chaffinches and other finches – which makes compulsive viewing. I’m up to about 5€ of bird seed a week right now, and it’s worth every penny. We have flocks of visitors each day, from the usual to those I’d never seen before. We have lots of blue and great tits, and there are lots of sparrows, as you’d expect. We had a few chaffinches, a couple of robins – who fought viciously about whose right it was to eat the seed, wood pigeons and collared doves. 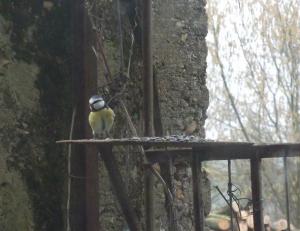 In recent days, however, we have had some less usual visitors – ones I’d never seen before, although the bird guide I have assures me that they aren’t rare. 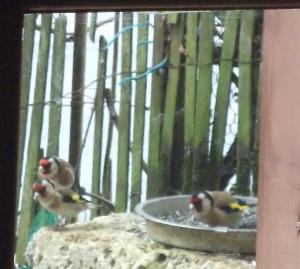 They’re all getting braver and braver, coming closer and closer to the window, although they’re not very good at coming close enough for a good picture, and they’re certainly not tame enough to come traipsing in like Steve’s mum’s blackbird friend! I tried to follow in her footsteps and chopped up some raisins and cranberries but the birds threw them on the floor to get the sunflower seeds.

Jake and I saw a partridge trotting along the road the other week as we were coming back from school – wasn’t sure what it was at first since it didn’t seem to want to fly and was not big enough to be a grouse, but a little research gave its game away.

We also had three herons in the cow field over the road last week – they’re quite regular visitors too, but it was nothing like the flock of egrets – now that was something else!! Between the buzzards and the hen harriers, the kestrels and the other predators, we’ve got a full complement of great free-to-view entertainment. I’d say it’s just about as interesting as Criminal Minds, but without the serial killers. Well, maybe, if you count the birds of prey…

At this point, I confess I am not that new to bird watching, having become addicted to it in the pantanal in Brazil, where I acquired the nickname ‘chachalaca’ – which I thought was a cute little bird until I realised it is an incredibly noisy and boisterous little thing. You never really ‘see’ it, but you can definitely hear it. Meh. Like I care about being nicknamed for a plain little noisy bird.

If you want to hear my sponsor, click here and press play!