Bit of Sly and the Family Stone for you today. Such a beautiful day, we can do with a bit of soul just to remind us that we’re all Everyday People.

I’m in the middle of a two-week block of busy. It was the refuge Open Weekend this weekend. It’s been a bit of a dead spell of late with very few adoptions and lots of arrivals. It’s the end of the hunt season and it seems to me that we’ve got a lot of sad-eyed boys and girls in. We’ve also not had as many adoptions to Germany or Northern Europe because of transportation issues, so the hunt dogs have stayed and stayed. The weekend saw the final adoptions of several dogs, and a couple of dogs adopted who’d gone right out of the refuge without a trial. Most people take dogs on trial these days. It’s a great idea. I had a broken-hearted little soul here on Friday, called Fripouille. He’s a six year old poodle whose owner had died. He’s obviously been very, very loved and he was completely lost. I’m still sad for him. You just can’t tell a dog that their whole world has changed and that the life they knew has gone. He was agitated on Saturday morning, pacing up and down. He finally found what he was looking for: his lead. He sat with his lead as if to say, “Lovely sleepover. Time to go home.” That poor little soul. It’s not the first time I’ve taken a dog on arrival, and they’re the only ones who are really sad to be here. They’ve lost everything and they don’t understand why. All the other dogs who come here are on a stopover out of the refuge, and they’re all “yeah!! Space! Whoooooo dogs!!!!” Not so for those who’ve lost everything. 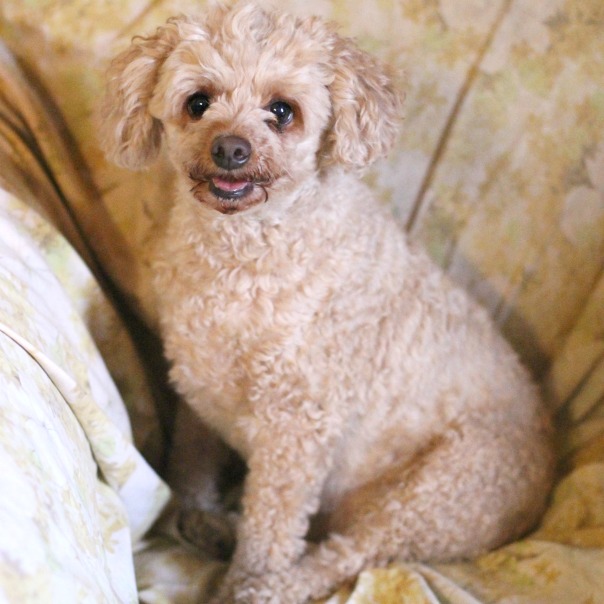 He was the kind of dog I’d have definitely ended up keeping by accident, even though perfumed poodles are not my thing. Luckily, he went on a trial adoption and there are a couple of other people who were interested too if it all falls through. I’ll stick with my random posse of weirdy misfits.

I also had my first lunch outside last Monday, though it seems longer ago than that. Lovely to catch up with people and actually sit and chat like a human being and grown-up with a group of actual people for once. A few of us met up again on Thursday for a co-working session and lunch at the café in Gourville, which was just lovely. Lunch was very good. Two lunches in one week, though! Not looking like that this week.

The river in my garden has finally gone back underground, leaving me with a knee-high tick zone. Looks like a few of the local creatures have been having a bit of a frolic. Spring is definitely in the air. This week, I’ll be mostly trying to get the grass under control. Everything else has benefited from a winter of heavy pruning. One of my peaches seems to have given up the ghost. It was planted in a hedge of conifers, which was rather strange. I’ve been roughly planning out a new bed and wondering if I can fit in a quick plant-buying trip at some point. I’m determined that the garden will be more flowery on my departure.

Anyway, I must get busy and get out of here – a million and one errands to do. By this time next Monday, things should be on slightly more of an even keel up to the holidays. Just where is the year going to?