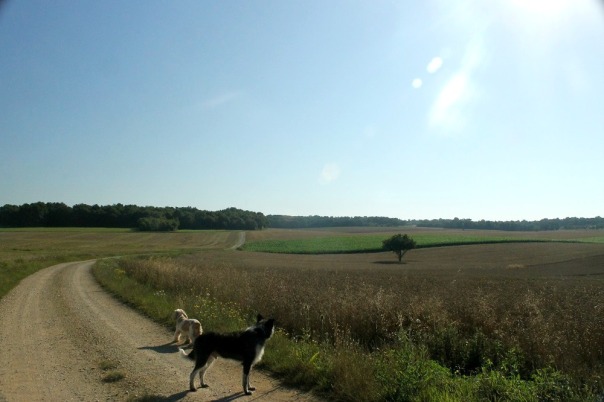 So… another week. And if you thought it would be a quiet one, well, it isn’t. My sister arrives for a few days, and another friend mid-week. I’m in a frenzy of cleaning. Not to mention, I had a great idea last week. A really great idea. A time-consuming monster of an idea that should run itself once set up. Let’s just say it was really a job for the professionals, but with only my own meagre skills, I’m going it alone. I will no doubt introduce it to you in due course!

Sadly, it is not a money-making idea, though it could be I guess. It is actually a lot of fun. I needed to extend myself a little, rather than just working very hard in my comfort zone. Are you interested in it yet?

As you can see, new woof-woof Amigo is out and about with us. Today was his first off-lead experience. He has walked with me now on lead for almost four months, so he is well used to being by my side. He and Tilly just trot along very happily. Heston races off and races back when he is off-lead, which is not very often these days. He needs nose-blinkers so he doesn’t get distracted by scents he just has to follow.

Amigo is a griffon x border, apparently. If you ask me, he is pure muttley (and no less adorable!) and it is very hard to tell what he is, if he is anything. Definitely a Heinz 57. That was one boy who was delighted to be off the lead this morning. That’s why older dogs are so often easy adoptions – they often know the rules already, unless they have been purely working dogs. Thus, no house-training (okay, a little reminder) no pulling on the lead, no disappearing. And if I say ‘sit’, he does exactly that. He barks very rarely, and never barks at guests, only things that startle him. He doesn’t like thunder (he shivers and shakes and hides, poor love!)

It took a bit of getting to, that photo (Heston is just out of shot, but he was with us, promise!) as Amigo was not good with Heston. They didn’t have a good introduction and the first few days were a bit tense. Now, there are occasional warning growls from Amigo if Heston comes up behind him, but that is all. Mostly, they rub along very well, although they are never going to be best friends. I’d guess that Amigo has been in a one-dog house and has been the treasured pet. He is very well-behaved. A take-anywhere dog. He isn’t even interested in Tilly, and every dog is interested in Tilly. She is the most interesting dog of all dogs. It’s because she smells so very terrible. Plus, she has no airs and graces. If she wants to sit with you, she will. She does this with Amigo, and he always looks so very alarmed. She isn’t good with new dogs and barks like a maniac until she realises they won’t eat her, but after this, she is fine.

Anyway, it is heating up here this week – it has been very cold, certainly for mid-July. I thought mid 20s was bad, but someone told me it was 12° in Normandy last week.

The sister and I will hopefully have some trips and excursions, and a right good catch-up. I haven’t seen her since October last year, and it seems like forever.

Next week, back to normal. Peaceful summertime. Lots to do.

Hope you have a sunshiney day too – love this early morning freshness here.