Well, not exactly the first, but the first of my perennials. 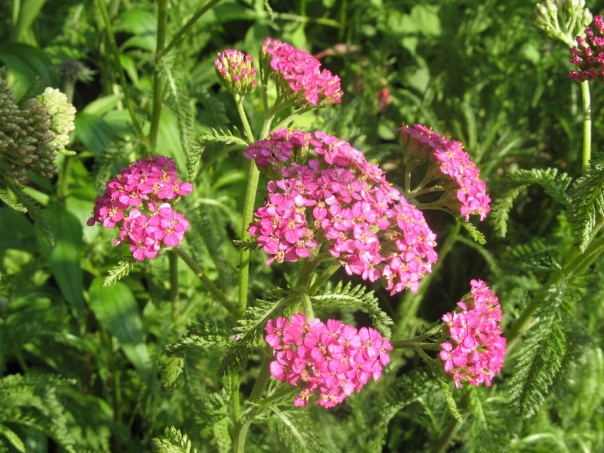 I love achillea – their flowers soften as they grow old, but I love their frothy green leaves as much. This one is Cerise Queen. I’ve also got Cassis and Summer Pastels but they are a little tardy this year. It’s amazing how much everything has shot up in this patch. The monarda is almost ready to flower, the dahlias have fat buds and the marguerites are also just about ready.

The vegetable patch is coming on a little – though the cardoons are the mighty kings of the show right now. I was never going to go to the effort of blanching, peeling and eating the stems, so right now, they form a huge and magnificent dinosaur hedge along the edge of one of my plots.

I’ve kept some peppers and chilis inside but the peppers I planted outside – well – they survived the rains. They might not have grown much, but they’re still alive. Then there’s the tomatoes. They’ve got little tiny toms forming – and I still have some more to go out. I think there are about forty in total.

The corn and mini-pop corn are doing fine and I’ve planted some pumpkins in the centre of the squares – I’ll be putting straw down as a mulch in the next couple of days.

Then there are courgettes, cucumbers and cornichons, but they are still tiny! I’ve got melons to plant out as well in the next couple of days. I doubt they will be able to get enough of a summer to really do anything, though. It’s at times like this I think about putting up a second polytunnel. However, if the weather is hot, it’s awful to have to work in a polytunnel. Oh the sweat!

The runner beans are flourishing; I love runner bean flowers – they’re just about the prettiest things in the vegetable garden. 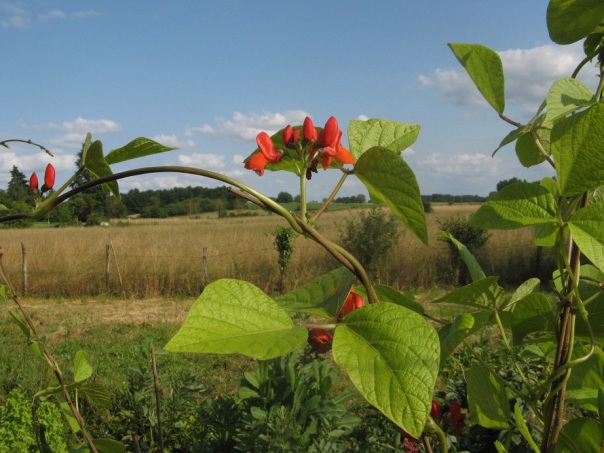 Lots of the lettuce have gone to seed, so I’ll pull them out and reseed. 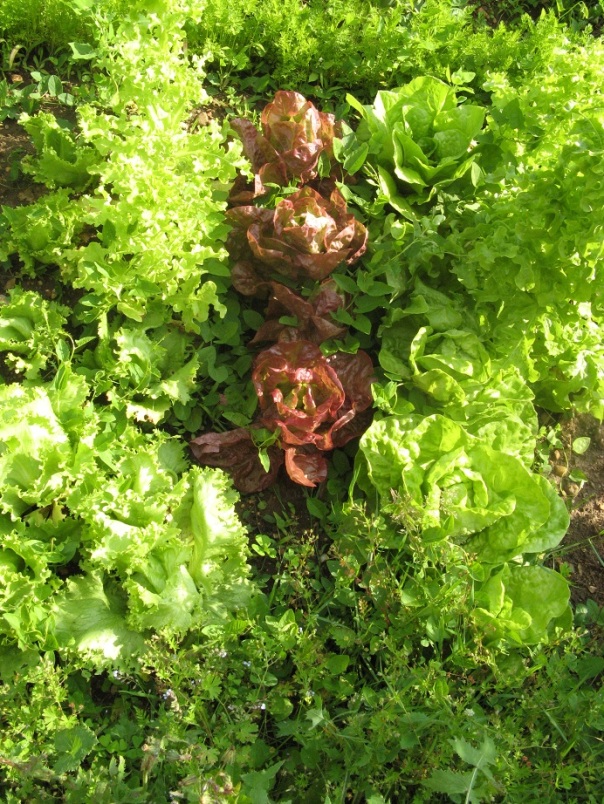 The kale is coming on fine and dandy – I suspect, like Mavis on 100$ a Month, it will make up a big part of my total for the year. I’ve got three rows of the stuff and it is looking remarkably healthy. The onions either side, well, they’re not as happy, and the beetroot are still all leaf and no beet. The leeks are looking more leek like and less like blades of grass. I’ve been clearing the weeds from that patch this week – an assortment of thistles, bindweed, forget-me-nots, purslane and other assorted things that I have no nice name for. I suspect I’ll be back out there tomorrow, as today is Manic Wednesday, where I teach from 8am to 7pm, and any spare time I have is going to marking my writing papers. Let’s just hope it warms up a little: it felt like April this morning – colder outside than it was in.