Being 9 years old in 1982, there was only one thing that interested me AT ALL, except for the very limber Adam Ant. That thing was Fame, of course. What else could a young girl want? Between Adam Ant and Fame, it’s no wonder I grew up loving men in make-up and leggings.

I was watching some reruns a few years ago and it struck me how very camp Gene Anthony Ray was. The things you never notice as a child. The days when Larry Grayson was no more camp than your favourite uncle, John Inman was just a very well-dressed man and Freddie Mercury was just a moustached man in leather.

Was it just because I was a child or were we really completely oblivious to the fact that the entertainment industry was a seething mass of camp men who were a little light in the loafers?

I watch the scenes where the girls are fighting over Leroy and I think they weren’t the only ones who needed gaydar.

Obviously, my Fame love explains my Glee love. There’s nothing like a bunch of weirdo misfits channeling their emotions through music and dance, is there now? However, Glee just takes it to a whole new level and Fame never had Sue Sylvester. You can tell I’m old though because now I look back on Fame, all the actors look really, really old and when I watch Glee, all the cast look really, really young. Ironically, most of the cast of Fame were a lot younger than the super-old cast of Glee. Cory Monteith who plays Finn Hudson is 30, for God’s sake! Even Olivia Newton-John wasn’t that old when she played Sandy in Grease. I’d hazard a guess that Stockard Channing was in her thirties when she played Rizzo though.

Fame also gave me an enduring love of legwarmers, ballet, tutus and dancing on taxis. I confess, though, the 9-year-old me had other loves. One of those was roller boots. Another was ra-ra skirts, as modelled here by the ineffably cool Strawberry Switchblade: 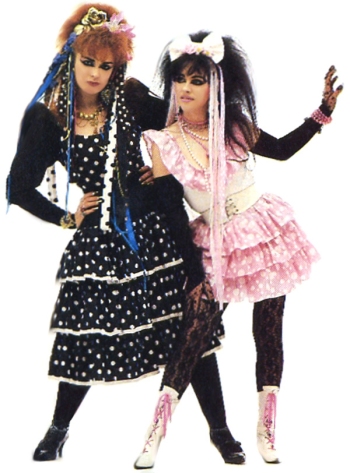 And finally, my love was for E.T. 1982 was a good year for me. I would hazard a guess, though, that as a result of the eyeliner, the New Wave goth look and the lace, that it is the reason I looked the way I did at 16… 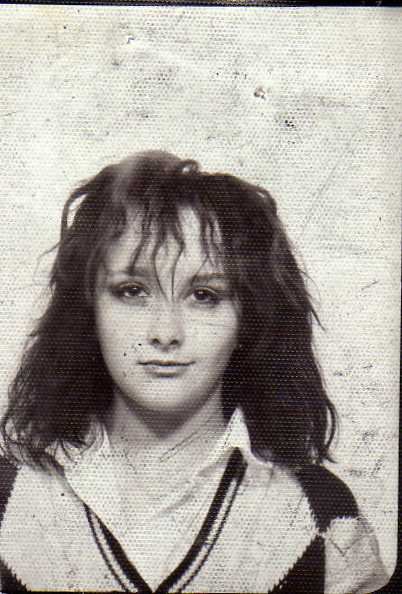 This was for my sixth form ID. I have no idea what attracted me to this jumper. I wore it a lot. It was all preppy and Molly Ringwald in The Breakfast Club. Usually, I wore either something outlandish or something black. I miss my silver spandex pants with pink dragons on them. I think I must have been told to tame it for the photo…

By today’s standards, pop stars are not only tame, but lacking in personality. It’s all just about how much flesh you can show or how extreme you can be. There’s no charm. Either you’re crazy Nicki Minaj or you’re Lady Gaga or you’re The Saturdays. Like Madonna or not, Cyndi Lauper, Wendy James, Debbie Harry, Strawberry Switchblade and Bananarama (still the most widely popular girl band ever…) didn’t have to show too much flesh. None of them had perfect bodies, all of them had crazy style and every single one of them inspired women of my generation not to be THAT bothered about their bodies or their hair and to use it as a statement. I’m not quite sure how Lady Gaga is a style icon any more. “Crazy” gets you a big twitter following.

So, Much Love to the girl bands who taught me that it’s cool to customise and that you can be pop and edgy at the same time. Much Love for 80s fashion, leg warmers, Fame and all things that glitter. May your Monday have just a little sparkle as well.

2 thoughts on “I feel it coming together…”