We’d decided to go for a picnic today – these three days off school can be a little taxing on the boy if he isn’t appropriately entertained, and he’d been off on Wednesday and yesterday without any ‘real’ entertainment. I really wanted to go to Chassenon and the ancient Roman city of Cassinomagus, a town dedicated to thermal springs, lying on the main route between Lyon and Saintes. We’re actually in the heart of the Gallic-Roman empire here – the crossroads between the north-south road from Poitiers to Spain and the east-west road from Lyon to Saintes lies only a couple of miles away. With a river and the crossroads, a bronze age helmet found in Agris a couple of miles away is a find that shows what an important route it was. I’m sure there’s more to be found, but that’s a story for another day. With cave habitation clear from the Dordogne, and the Gallic-Roman settlements dotted across the region, we’re in prime ‘history’ territory – to mention nothing of the Maquis – the resistance – and the Vichy line.

So… off to Cassinomagus via the lakes at Massignac, a beautiful spot in the Charente region, not far from where the land gives birth to the mighty Charente river. We watched a fishing competition (with a very poor catch) and picked up a bagful of sweet chestnuts – les chataignes – before carrying on to Cassinomagus.

The wonderful thing about France is that it’s not busy. There aren’t huge queues. When we got to Cassinomagus, there was a tour guide in front of us with 20 or so coffin dodgers, but we chose to go via the alternate route, leaving the best until last and until the tour guide was out of the way. Like that would ever happen in Chester or York.

There was a beautiful ‘roman’ style garden, complete with lovely names for plants on roman roof tiles – novel and definitely an idea for me to steal. 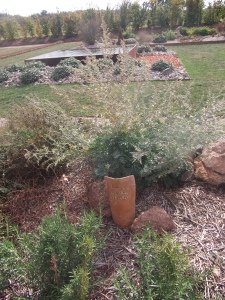 It’s definitely an idea to steal! I liked the herb garden very much, filled with rosemary, sage and thyme, and incredibly pungent – in a good way.

What always amazes me is that these Roman ruins were ‘undiscovered’ for a very long time – and it makes me wonder how on earth something of that nature could have been hidden away – the same with Mayan, Inca and Aztec ruins.

The baths were quite spectacular – and it just reminds me of the ‘what did the Romans ever do for us?’ scene in the Life of Brian.

After that, we took a bit of a detour along a short bit of road known as ‘Richard, Coeur de Lion’ – a rather bizarre name for a bit of road – to Rochebrune – a small chateau.

As we drove back through Chabanais, there was a huge fete in swing with lots and lots of pumpkins 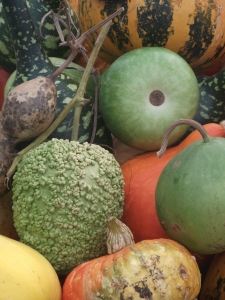